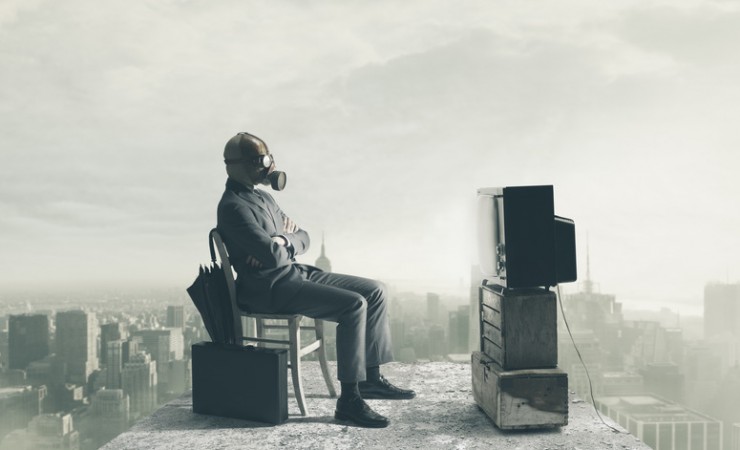 Among the most serious problems facing society today is that of pollution and its environmentally destructive effects.

Air pollution, acid rain, toxic landfills, tainted and toxic drinking water, industrial pollutants in our rivers and oceans, toxic or cancer-producing pesticides on the produce we eat, poisons in the fish we eat, unhealthy hormones and antibiotics in meat and dairy products, nuclear waste and accidents, radiation testing by the government on unsuspecting thousands, ozone depletion and global warming—the list of bad news on the environment is seemingly unending.

Each of these environmental problems represents a serious menace in its own right. Take, for example, the problem of global warming.

Carbon dioxide, water vapor and other atmospheric gases trap the sun’s heat and warm the Earth. Without this “greenhouse effect,” life on Earth would be impossible. But the greenhouse effect is being intensified by modern capitalist society. The buildup of carbon dioxide is primarily the result of burning oil, gas, coal, wood and other fuels to provide energy for capitalist industry. The profit-motivated destruction of forests the world over has also played a role because trees, like other green plants, consume carbon dioxide.

Studies have confirmed the trend toward global warming time and time again over the past two decades and shown that the trend is accelerating.

Capitalists and capitalist government, however, have spent more time attacking the studies than attempting to control pollution—not surprisingly, since controlling pollution and switching to cleaner, alternative energy sources would reduce capitalist profits.

But powerful elements of the ruling capitalist class didn’t want to be pushed into taking action against air pollution—the owners of major polluting firms and others worried about the drain on profits generally if government pollution-control regulations were to be seriously stiffened and enforced, or if spending on pollution controls were to be greatly increased.

Bureaucrats sympathetic to those concerns in the Office of Management and Budget decided that, since the facts of NASA’s report didn’t suit them, they would have to change the facts before publishing the report. At issue in the dispute were the computer models used to predict climatic change. The OMB discounted the models, completely undercutting the report’s conclusion that the environmental dangers were so certain that they warranted immediate action against air pollution.

Despite a 1992 international agreement among major capitalist nations that “recognized” the problem and promised to negotiate reductions in greenhouse gases, history seems to be repeating itself.

In September 1994, The New York Times reported a new assessment of the problem by a United Nations panel that corroborated the conclusions of the 1989 NASA report and earlier reports.

“The Earth,” the Times said, “has entered a period of climatic change that is likely to cause widespread economic, social and environmental dislocation over the next century if emissions of heat-trapping gases are not reduced, according to experts advising the world’s governments.” “The new feature of the assessment,” the Times continued, “is that the experts are now more confident than before that global climate change is indeed in progress and that at least some of the warming is due to human action….”

Despite the more widespread agreement among scientists, the Times noted, “skeptics continue to assert that the models [used in the predictions] fail to simulate the present climate realistically and hence are an unsure guide to future climates.” The report will no doubt have little effect on the present efforts of the U.S. Congress to undercut even the inadequate and infrequently enforced provisions of the Clean Air Act.

HEADS IN THE SAND

In short, the world’s polluters and their allies remain so stubbornly defensive of capitalist profits that they would rather bury their heads in the sand than face up to the fact that they—and all society—will bear far greater costs in the future, as global warming continues.

Their attitude is sheer madness, especially in view of the combined effects of the plethora of environmental disasters facing the world today. Taken together, they add up to one frightful, catastrophic process. This ongoing and worsening process of environmental degradation will be difficult to reverse. The longer it continues, the greater the disastrous consequences for present and future generations, and the greater the likelihood that the damage will be irreparable.

Firm and decisive action against all forms of pollution is long overdue. Over the last 25 years or so, millions of people have protested against one form of pollution or another. They have demanded firm action to protect the environment and have repeatedly elected politicians who have promised firm action. But the crisis continues.

The laws that have been enacted and regulatory agencies that have been established have at every turn been subverted by the very corporations and firms responsible for the pollution, and by the class of capitalists that owns them. The regulations themselves have been watered down; agencies aren’t funded adequately to act on them and are frequently corrupted by corporate interests; enforcement of even inadequate regulations has been poor, raising the question of whether the laws and regulations were ever in-tended to be anything more than window dressing.

To understand why regulation hasn’t worked and what kind of action will work to end this worsening environmental nightmare, it must be understood that the environmental crisis is fundamentally an economic and class issue. Its cause lies in the nature of the capitalist economic system.

Pollution is not an inevitable byproduct of modern industry. Methods exist or can readily be developed to safely neutralize, recycle or contain most industrial wastes. Less polluting forms of transportation and energy can be built. Adequate supplies of food can be grown without deadly pesticides. The problem is that, under capitalism, the majority of people have no power to make these kinds of decisions about production.

Under the capitalist system, production decisions are made by the small, wealthy minority that owns and controls the industries and services—the capitalist class. And the capitalists who make up that class make their decisions to serve, first and foremost, one goal—that of maximizing profit for themselves. That is where the environmental crisis begins.

From the capitalist point of view, it is generally less costly to dump pollutants into the environment than to invest in pollution-control equipment or pollution-free processes. It is more profitable to continue energy production as it is rather than invest more heavily in solar, wind or other alternative energy sources. Likewise with every other aspect of the environmental crisis: Socially harmful decisions are made because, in one way or another, they serve the profit interests of the capitalist class.

Capitalist-class rule over the economy also explains why government regulation is so ineffective: under capitalism, government itself is essentially a tool of the capitalist class. Politicians may be elected “democratically,” but because they are financed, supported and decisively influenced by the economic power of the capitalist class, democratic forms are reduced to a farce.

The capitalist class and its government will never be able to solve the environmental crisis. They and their system are the problem.

It is up to the working class, the majority of people who actually produce society’s goods and services and daily operate its industries, to end this crisis.

The action workers must take is to realize their latent economic and political power as operators of the industries and services by building industry wide unions integrated into one movement with the goal of building a new society with completely different motives for production—human needs and wants instead of profit—and to organize their own political party to challenge the political power of the capitalists, express their mandate for change at the ballot box and dismantle the state altogether.

The new society they must aim for must be one in which society itself, not a wealthy few, would own the industries and services, and the workers themselves would control them democratically through their own organizations based in the workplaces. In such a society, the workers themselves would make decisions governing the economy, electing representatives to industrial councils and to a workers’ congress representing all the industries that would administer the economy.

Such a society—a socialist industrial democracy—is what is needed to solve the environmental crisis. By placing the economic decision-making power of the nation in the hands of the workers, by eliminating capitalist control and the profit motive in favor of a system in which workers produce to meet their own needs and wants, the necessary resources and labor could be devoted to stop pollution at its source and clean up the damage already done.