Yemen: ‘I thought that I would not be affected’

Imperialism and the new wars in the Middle East

Yemen: ‘I thought that I would not be affected’ 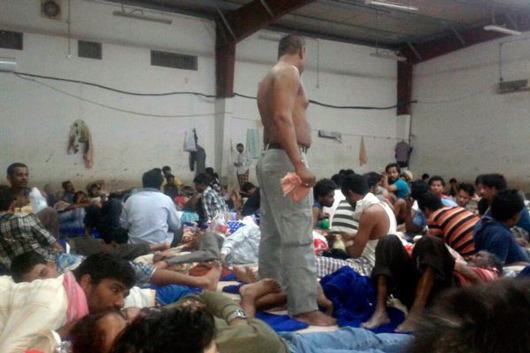 A deportation centre in Saudi Arabia

This is the story of 30 year old Abdulsalam Al-Kibdi, a Yemeni man who spent 13 years as a working migrant in Riyadh, Saudi Arabia, living with his wife and three children, the youngest of whom is only a few months old.

“On 22 November 2017 police officers stopped by my work and asked me to get into their truck. I knew that the Saudi government had put new restrictions on Yemeni migrants and workers but I thought that I would not be affected.

I showed the officer my documents that proved that I was legal, having been sponsored by a Saudi citizen, and that I had a valid working visa, but the officer got very aggressive and told me to get into their truck or they would take me by force. Because I knew my papers were 100 percent legal I went with them thinking it would not be long before someone checked it.

Within five minutes the truck was full of people like myself with valid documents, but the officers were very aggressive with us all, telling us if we didn’t shut up they would push us to the road and kick our faces. We arrived at a detention camp, where the officer at the gate asked how many of us there were and the officer on our truck was looking very pleased with himself as if he was expecting a reward per head. I noticed around 100 more trucks full of men like myself.

It was November and very cold. We were treated badly, with no access to toilets for hours. We tried to ask questions but were shouted at, badly handled, slapped on the face and humiliated.

Every half hour around 100 trucks came, full of Yemeni men. Five hours now with no food, no water, no toilet. It was midnight in the open in the very cold night and everyone was exhausted. We slept on the rough floor.

By the afternoon next day a truck come to deport us and we had to sign statements that they had written for us. I refused to sign — I wanted to know what my crime was. The officer said our crime was nothing, they just didn’t want us Yemenis in their country. Then I knew it was a done deal and I didn’t have a chance.

We moved to somewhere else like a deportation centre.

Meanwhile my sponsor came down and showed his documents confirming that he was my sponsor and that I was working for him, but he was told that it was not the responsibility of the deportation centre to handle the decision, and he would have to take it to a higher authority. He did this using solicitors and paying money but with no result.

Five days passed and every day 500 people arrived. The camp was crowded with little space and full of people, elderly, sick, women and children. You could not sleep for ten minutes. When my turn came I thought I was going back to Yemen but I was transferred to a jail called Haar. We were chained two by two. I spent 45 days there and they took everything from us even the money in our pockets.

We were badly treated there, with no respect. Our elderly were treated with no mercy either. Our elderly imam was very sick, vomiting blood, and another person died, but there was no help or medical care. Twice a week between 700 and 800 people left on coaches back to Yemen. We lived in anxiety, not knowing what was happening to our families.

At the end me and other people with families were released after paying 30,000 Saudi riyal (over £6,000). Others paid but still found themselves deported to Yemen anyway! Later after my release, the release was overturned and I was facing deportation again. I lost everything — my house, my car, my money, all my personal belongings.

I tried all the legal routes. I knocked on all doors to go somewhere to be able to work and look after my family. I tried the UK embassy and many other countries but all refused. Even Turkey and Morocco are no longer giving visas to Yemeni.

Then I had to try the illegal ways. I am determined to give my children the respect that they deserve. I had to use a lot of money and take many risks. I went through three countries risking my life, badly treated, especially in my fellow Arab countries. I managed to get into Europe, but it has cost me about 100,000 riyal (over £20,000) in total so far. When I arrived I immediately felt my humanity was respected.

However my journey is not finished. Although I am in Europe I don’t know what is going to happen to me, away from my family but full of hope in humanity for a better tomorrow for my children.”