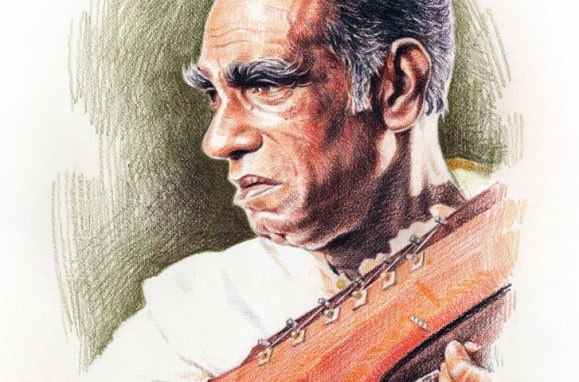 Where music is concerned, no fine line can be drawn to separate Sri Lanka from India and the rest of the world. In fact, through the ages, all of Sri Lanka’s fine arts evolved as part of the Greater Indian Tradition. In modern times new art forms came from the West, so that Portuguese lullabies and Christian hymns joined North Indian ragas and Buddhist chants as part of the island’s musical heritage. All the while, Sri Lanka’s village folk created songs and dances reflecting their own more isolated lives.
So what, exactly, is Sri Lankan music? This question began to matter in 1948 when Sri Lanka, then Ceylon, emerged as an independent nation. Happily, this is about the time that K. W. D. Amaradeva began his musical career. For many Sri Lankans, he has provided the answer.

Born Albert Perrera, Amaradeva came early to music. His father, a carpenter, played the violin. By the age of seven, young Albert was playing the violin too. He quickly mastered the Bengali tunes then in vogue and from his older brother learned the rudiments of the classical North Indian raga. A prodigy, he became a star at local recitals and gained early renown as a singer of Buddhist devotional songs. By thirteen, he was performing on the radio. By nineteen, he was playing the violin, singing, and composing incidental music for the film “Asokamala.” Little wonder that he left school to pursue a life of music.

Finding work at Radio Ceylon, Perrera emerged as a brilliant innovator in Sinhalese music and was soon welcomed into the company of leading artists and intellectuals. Sensing the young man’s genius, some of them raised a fund to send him to India for classical training. At the Bhathkande Institute of Music in Lucknow, Perrera sat at the feet of India’s music masters and won first prize in an all-India violin competition. He returned to Sri Lanka in 1958 as Amaradeva, the name he would make famous.

Issues of national identity now preoccupied many Sri Lankans. In the spirit of the times, Amaradeva began arranging and performing indigenous folk songs, embellishing them with Indian ragas and thus elevating them from simple tunes to more sophisticated compositions. In other innovations, he experimented with Western harmony and counterpoint and with South Indian and Tamil musical forms. With lyricist Mahagama Sekera, he explored ways to wed the cadences of classical Sinhalese poetry to the new music. In time, Amaradeva’s music came to reflect an entire spectrum of borrowed and indigenous influences, a uniquely Sri Lankan synthesis.

A prodigious creative artist, Amaradeva has composed music for ballet, film, the stage, and countless radio and television programs. He has written over one thousand songs-melodious, lyrical, haunting songs of patriotism, beauty, faith, passion, and love. For over fifty years now he has also been performing his songs over radio and television, in concert, and on gramophone records, audiotapes, and CDs. Amaradeva’s fluid, resonant voice long ago overshadowed his violin. Today, Sri Lankans need only turn on their radios to hear it daily. “He sings so beautifully,” says one admirer, “one has to stop everything and listen.”

Music, says Pandith Amaradeva, “is the finest of the fine arts.” His music is both very fine and widely loved. Sri Lankans say it is music that transcends ethnicity, class, and age. Or as his friend Ediriweera Sarachchandra put it, it is music that “speaks to the soul of the nation.”

In electing K. W. D. Amaradeva to receive the 2001 Ramon Magsaysay Award for Journalism, Literature, and Creative Communication Arts, the board of trustees recognizes his life of dazzling creativity in expression of the rich heritage and protean vitality of Sri Lankan music.

RESPONSE
Your Excellency President Gloria Macapagal Arroyo, members of the Magsaysay family, distinguished guests, trustees, fellow awardees, ladies and gentlemen, Mabuhay!
I am deeply honoured as a Sri Lankan to be conferred the prestigious Ramon Magsaysay Award tonight — an award which in turn, honours the name of one of the most outstanding statesmen of Asia, a humanistic leader and a staunch champion of liberty of whose services the world was tragically deprived 44 years ago.

I still have pleasant memories of my first visit to Manila way back in 1966 to attend the International Music Symposium.

The last recipient of the Magsaysay Award from my country was Prof. Ediriwira Sarachchandra, the father of modern Sri Lankan drama, with whom I was privileged to enjoy a fruitful partnership of over four decades until his demise five years ago. I collaborated with him in his musical plays and it was indeed a rich and rewarding experience.

If Dr. Sarachchandra’s pioneering role was to adapt the traditional drama to the modern stage, I in my own humble way have sought to undertake a similar task for my country’s music. What I have tried to do is to blend the North Indian classical tradition which is inseparable from the great tradition in our part of the world, with the folk music of Sri Lanka to make of it what I hope is a distinctive idiom of music.

While recognizing this great tradition, I have also been fully exposed to other influences, both occidental and oriental, believing with Mahatma Gandhi that, I quote – “I want cultures of all lands to blow into my house as freely as possible but I refuse to be blown off my feet”, unquote.

Critics have been kind enough to say that I have been able to create a national idiom of music without merely theorizing on the need for one. What, then, has been my approach to music?

Basically, what I have tried to do is to build on the work of masters both in India and Sri Lanka while not adhering slavishly to either the classical tradition or the folk tradition.

My life’s mission has been to refine this folk tradition and synthesize it with the Indian classical tradition, which I consider to be part of our heritage, without diluting its quality but adding a new dimension to it.

I thank the Ramon Magsaysay Award Foundation for this honour conferred on me personally and on Sri Lanka in general, and hope that this will be a source of inspiration to my country’s new generation.