The uncertain destiny of the human species 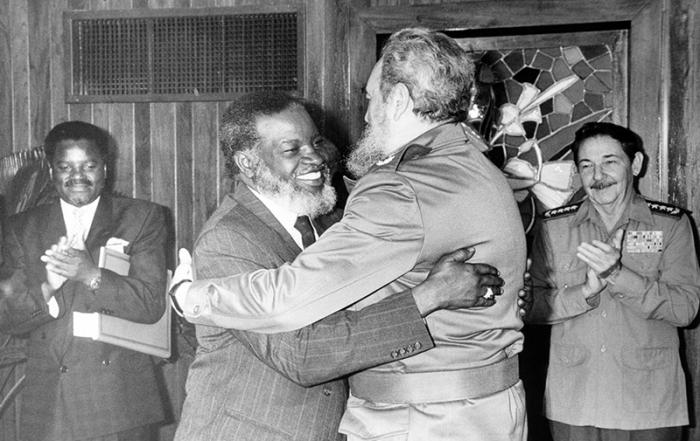 As soon as Namibia achieved its independence, the nation established diplomatic relations with Cuba, an island 11,000 kilometers away.

It was March 21, 1990. Ndapandula Akwaake had not yet been born, much less could her family have imagined that one day she, or some other relative, would travel to the Caribbean island experiencing a Revolution – the impact of which was felt, in a very special way, back there.

Ndapandula is now 21 years old, and is in her first year of a university studies in Stomatology. She still struggles to speak Spanish, but tries her best, as she knows that she must deal with very complex words like lipólisis (lipolysis). The term appears in the assignment list she has just printed out and is carrying in her hands. She studies the word thoroughly and attempts to pronounce it.

She speaks very well of the Cuban educational system. With a certain shyness, she notes: “University in Namibia is very expensive, but thanks to this scholarship, an opportunity offered by my country’s government, today I am here.”

Ndapandula, resident of Katurura, a township in the Namibian capital of Windhoek, is not the only member of her family studying in Cuba. Her cousin, Gabriel Endjala, decided to study Medicine here.

Meanwhile, with braids and sporting a fashionable cap, Nelago Kapapu starts by speaking in a mixture of English and Spanish, until her Spanish starts to flow. She comes from Khomasdal, a suburb of Windhoek, and appreciates the opportunity to study on the island, after having gone through a tough selection process.

Before her, during the war in Namibia, her uncle Josua Auala arrived to Cuba. Aged 25, Nelago believes that she could add very little to the “sad story of Cassinga.” Cassinga is a township in Jamba, province of Huíla, southern Angola. Back then, it was home to a Namibian refugee camp, which was attacked by the apartheid South African army.

Forty years have passed since that massacre and, according to Gisela García Rivero, director of Sub-Saharan Africa at the Cuban Ministry of Foreign Affairs (Minrex), it still has “a high patriotic significance for the Cuban people and our African brothers and sisters.

“Under the pretext that they were SWAPO (South West African People’s Organization) fighters, that fateful May 4, 1978, some 600 people were massacred, mostly children, women and the elderly. It was a massive crime, genocide by the South African racists and a shameful page for the international press that remained practically silent in the face of this event,” recalls García.

She goes on to note: “Angola must receive the recognition it deserves for all the help it provided to the countries of the region in the fight against colonialism, racism, and apartheid. Its territory was destroyed in actions like that of Cassinga, burnt to the ground, with a heavy cost in terms of civilian lives, and its entire infrastructure was destroyed.”

Nelago confesses that her uncle is very grateful for the help received from Cuba. The ties between the African continent and the island are based on a shared history.

As García points out regarding this history, “We must not forget that a Cuban unit, based in Tchamutete, immediately traveled to assist the Namibians, under enemy air strikes. The tombs that hold the remains of our fallen brothers in Cassinga can still be found in Tchamutete.”

Nelago’s uncle told her that she would be fine and learn a lot in this country.

“He told me that Cuba was a nice country, with a great education system,” she adds.

Since she has been in Cuba, she has come to learn about healthcare and training of human resources on the island. Both she and Ndapandula represent two of the most important areas of collaboration between the island and Namibia. But they are not the only ones.

According to information from Minrex, the two countries also collaborate in the construction, communications, mining and agriculture sectors. Likewise, according to the Director of Sub-Saharan Africa at the Cuban Foreign Ministry, efforts are being made to expand cooperation in the fields of sports, tourism and pharmaceutical manufacturing.

Of course, medical collaboration between Cuba and Namibia is almost as longstanding as their bilateral relations. “It dates from 1990, a few days after independence,” Minrex confirms.

Of the 111 Cuban collaborators currently working in Namibia, 88 are linked to health. Meanwhile, through 2017, 1,090 Nambians had graduated in different specialties from Cuban universities, including Nelago’s uncle. She herself is one of the 267 Namibian students enjoying scholarships in Cuba today.

It’s little surprise to know that, of them, a very high percentage receive their scholarships to study health-related fields (259), while eight are in Education.

The majority of Namibian students, Minrex specifies, are studying at the Latin American School of Medicine (ELAM). The country’s diplomatic mission in Havana informed us that a large number of them are studying Stomatology.

The south-west African nation has English as its official language, but several other languages are also recognized nationally or regionally, such as Afrikaans, Rukwangali, Setswana, Silozi, Khoekhoe, Oshiwambo, and Herero, Nelago explained.

Only a few months have passed since Namibian Prime Minister, Saara Kuugongelwa-Amadhila, visited Cuba. She met with then President Raúl Castro Ruz; paid tribute to Fidel and interacted with compatriot students at ELAM.

That visit “can be described as excellent. It showed the upward course of the historic, special bilateral relations shared by Cuba and Namibia,” the Cuban Foreign Ministry noted at the time, while emphasizing the political will to further deepen and diversify bilateral cooperation.

– Diplomatic relations were established between Cuba and Namibia on March 21, 1990, the same day the African nation achieved its independence.

-The most important bilateral cooperation is seen in health and human resources training in Cuba.

-There is also cooperation in the construction, communications, mining and agriculture sectors. Efforts are underway to expand collaboration in the fields of sports, tourism, and pharmaceutical manufacturing.

-There are 111 Cuban collaborators currently working in Namibia, 88 of whom are linked to health.

-1,090 Namibians have graduated in different specialties from Cuban universities.

-There are currently 267 Namibian students studying on scholarship in Cuba: (259 receive their scholarship through Cuba’s Ministry of Public Health, and eight through the Ministry of Higher Education). The majority are studying at the Latin American School of Medicine.